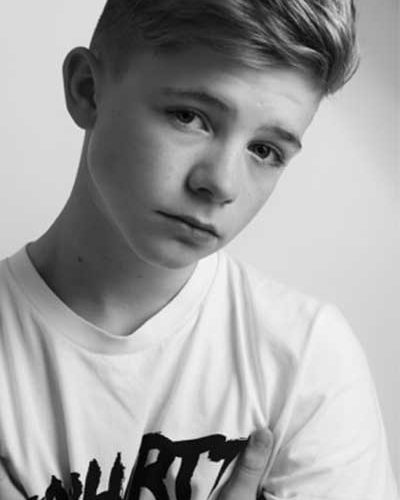 Biography
Paddy started singing 4 years ago at the age of 9 singing in the school choir and some solo parts.
When he was 10 he took part in “Teenstar” in Manchester, This was his first time on a big stage singing in front of a lot of people where he reached the semi finals.
Paddy then started having vocal coaching by Sofia of Sofia Management to improve his vocal range and stage presence.
After Teenstar Paddy sang a couple of songs at a anti bulling awareness evening in Chester. This was something that was important to Paddy and meant a lot to be able to be part of.
At 11 Paddy was contacted by a CBBC scout about a new TV series called “Got What It Takes” to see if he would audition. He did and was one of the lucky 8 contestants along with their Mums to be chosen for this singing competition.
He got to experience the challenge singers/ songwriters/ actors/ vloggers experience everyday. This was such a great experience as he learnt so much about the business and himself.
After “Got What It Takes” Paddy was asked to represent the program at the Hay Festival in Wales, he had to talk about the challenges, the process and what he had learnt from the program, and performed his song and did a Q&A session afterwards.
From the Hay Festival Paddy was asked to do a event in Birmingham where he presented and sang, which was a new pathway for him.
Paddy also attends drama as well as vocal coaching with his management.
Paddy is a keen footballer, he plays for his school team and a local club. He used to play at a academy as well but felt he wanted to focus more on his singing so stopped for the academy but still plays for school and local team.
Has always liked dancing but hasn’t had dance lessons, maybe in future he will.

Singing on the “Got What It Takes” show for CBBC

Co-presenting the Teen Awards for CBBC

Presented series 2 of “Got What It Takes” preview for CBBC

Keen footballer as well as singing, presenting and acting