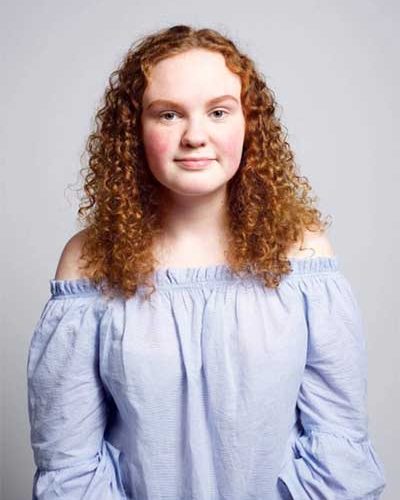 Harriet enjoys singing and dancing and acting. She plays the flute, piano, banjo. Harriet loves musical theatre and taken part in school productions such as Les Mis and West side Story playing Big deal one of the main characters. Harriet has achieved level one,two,and three in her Lamda and going on to level 4 this year and grade 3 singing and grade 2 piano. Harriet attends keep fit lessons and dance which she passed her bronze with honours.

Harriet was asked to audition for Swallows and Amazons from the casting crew. She attended four separate stages and was invited to London with an acting coach. It took a further two weeks to decide on who got the role out of two characters to play Nancy. Unfortunately it wasn’t Harriet’s time but they wrote her a personal letter and offered to keep her on the books for another year, which is something they don’t usually do. Harriet was put immediately on Lintons management books and was selected to play part of the core 12 in a new series class dismissed. She was invited back each year and got to play featured parts and the producer wrote a sketch just for Harriet. She also played a role of a Shelby in Peaky Blinders with Cillian Murphy. Harriet has a natural flair to build relations with other professional actors. Harriet was also selected to the final two of the worst witch but she was not ( plump) enough for the role. Harriet has been involved in other extra work like So awkward, the five, Raised by wolves, Creeped out.

Harriet has a natural singing voice and has won talent shows in Wales whilst on holiday. She has taken part in drama show cases at school. She has also performed at Darwen school of music annual concert singing a range of songs. She took part in Bolton big sing and got through to the semi finals. This was followed up by Bolton FM and Bolton news as Harriet had been deaf as a child before re constructive surgery. Recently she was asked to sing at the Victorian markets for the food and wine festival and perform for a whole hour.

Harriet has composed and written her own song about the struggles she endured as a child. She is in the process of writing another.

Harriet has taken part in a Bolton Rock it scheme where she has had to sing live at two concerts with a band that they have names the Red room. This took her out of her comfort zone as she doesn’t like rock music.
Harriet can speak some German and Spanish. She loves to explore accents scottish, Irish , Scouse.