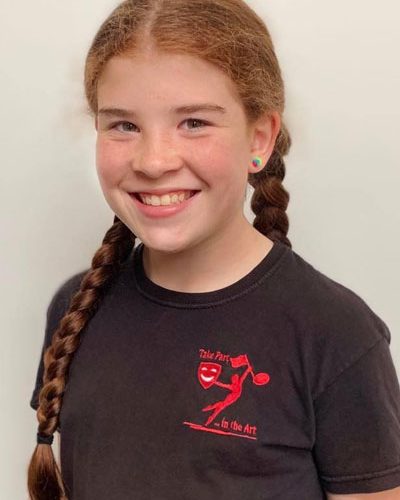 Samantha has loved performing ever since her first appearance at her local theatre at the age of 5.

She regularly attends a local stage school and enjoys both group and individual lessons, studying both acting and singing, and is currently working towards her Grade 3 LAMDA exams. She also attends a local dance school where she has lessons in ballet, tap, modern, musical theatre and street dance. She is regularly involved in amateur dramatics at the local theatre, including a number of appearances in the annual pantomime.

Away from performing, she is actively involved in other activities including karate, Guides and zumba. She is very sociable and enjoys spending time with her friends. She loves to read and enjoys watching films. She also has a strong love for animals, particularly dogs, and is responsible for caring for her two guinea pigs at home.

Samantha’s ambition is to develop a career in acting and she is keen to gain further experience.

Samantha has performed in a number of shows at her local theatre. She first appeared there at the age of 5, when she sang a solo of “Tomorrow” from Annie. She has gone on to appear in three pantomimes there and played the role of the Little Red-Haired Girl in You’re a Good Man Charlie Brown. She is currently rehearsing for The Sound of Music in which she will be playing the role of Brigitta Von Trapp.

With her stage school, she has appeared in a number of shows, including Seussical the Musical, Peter Pan, Bugsy Malone, Singing in the Rain, Mary Poppins, The Little Mermaid, The Lion King, Elf and, most recently, she took the lead role in Annie.

With her dance school, she has appeared in two shows at the Buxton Opera House and one at the Palace Theatre, Manchester, performing a variety of genres, including ballet, tap, street dance and musical theatre.

She has starred in numerous school plays, taking on the role of the Genie in their most recent production of Ali Baba and the Bongo Bandits.

Samantha can swim, run and do gymnastics. She has represented her school in a number of sports, such as netball, lacrosse, tag rugby, cross country and football. She is also a yellow-belt in karate.

She has a talent for choreography, including zumba routines as well as dance routines.