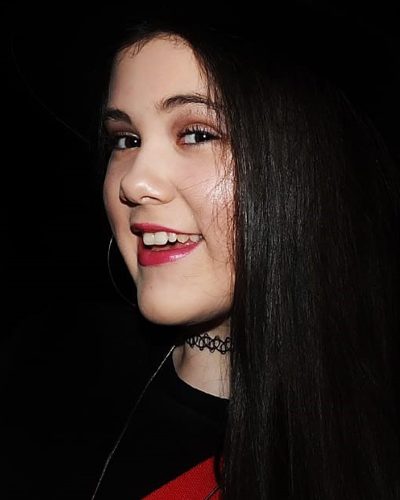 Isabella has been training since the age of 7 although she has loved singing from ages 4. over the yrs she has trained and passed Musical theatre solo exams to LCM.G4, Trinity G5, Lamda solo drama G3 and Abrsm piano G4 along with countless appearances for Walsall. Sandwell and Wolverhampton council outdoor and indoor events. e.g. Britain in Bloom award ceremony held at Aldridge Town hall 2017 and Sandwell Childcare services award ceremony 2019 at WS10 Club. Isabella loves to play her piano and has regular lessons at the moment working on a G8 piece by Francesco Parrino and has already used one third of the score as an intro for her performance of Lewis Capalldi Someone you loved. which was received to rapturous applause. She recently has taken up the guitar with weekly lessons and last week for Signal 107.7 radio Wolverhampton used it a version of Eva Cassidy’s Somewhere over the Rainbow
in a 45 min set for Wolverhampton Live Day event. After having a bullying occurrence at her junior school Izzy wrote a poem about her feelings and then much later turned it into a song and it was then she realised she has some songwriting ability. since that time she has composed and performed many songs based on her young life experiences in fact winning Sandwell Shape your Talent (£500 Prize Money) playing keyboard and singing her own song” Remember”
Over the yrs Izzy had been in many productions from playing as Quince from Mid Sum Dream for Young Rogues drama school in Bham shown at Bham Rep. her junior school where an outside production team was brought in to produce a fantastic version of Oliver when she played as Nancy to fantastic reviews to more recently at Walsall youth theatre group where she has played as Bratt in Whistle down the Wind, Marty in Madagascar
As a music scholar achieved by audition as the school outside our catchment area Izzy is studying music theory etc. to achieve a place at B.O.A. at Millennium Point in Bham for 2020 entry and sang at the conservatoire there last yr for the MFY National Festival with her duo partner 2018 (no longer in duo)

Although Izzy is very good in the musical theatre genre it’s not where she sees herself rather the chart type r and b and also has been known to perform a few rock songs.

Izzy says she is interested in music production and from her own idea says as a back-up plan, she wants to achieve diplomas in piano and voice so one day can have her own business teaching children to play piano and sing.